“Thus organisms and environments are both causes and effects

in a coevolutionary process.”

Job aps are in

This quarter at UC Santa Cruz, I am having a blast teaching Introduction to Field Research as well as Ecology of Reefs, Mangroves, and Seagrasses. 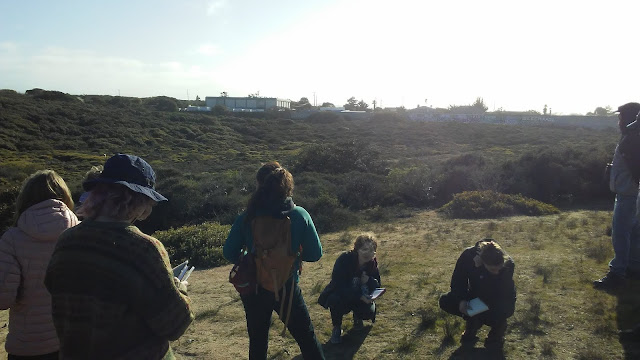 Unfortunately, the term ends in April, and then I'll be on to new things! It has been very exciting applying for marine biology jobs all over the Pacific Northwest. I see myself as an educator, researcher, and natural resource manager, and so far this year I have applied to four jobs in these categories, including:


All these are full-time positions doing things I love in places I love (with the exception of one place that will remain unnamed in case employers are checking out this blog; hehe).

I look forward to giving updates on the statuses of all these soon!

* Update! A few hours after posting this, I got invited to an interview for the first job on this list. Yay! 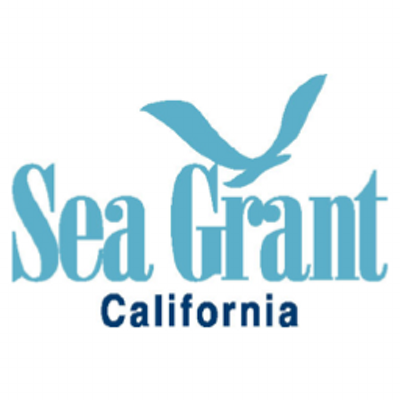 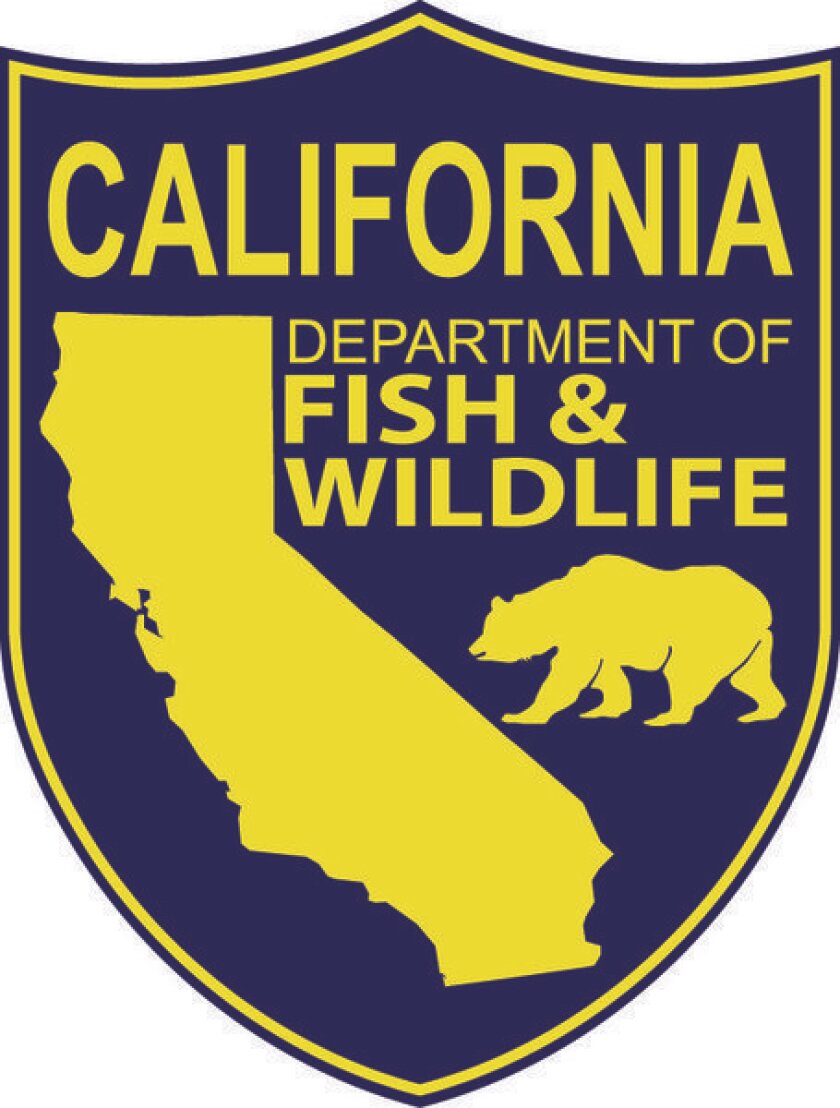 I am very, very excited to announce that I have completed my degree and I am now Dr. Gina Contolini! 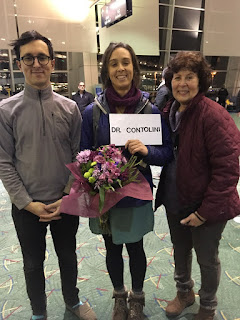 Me with my family the night I passed my closed defense. 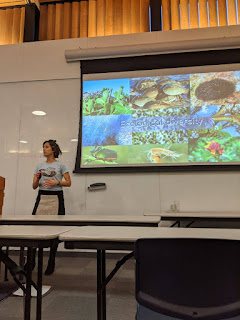 Me starting my public defense.


On that note, my first dissertation chapter was published as a stand-alone research article in the journal Oecologia. Seeing this publication come out was a great way to graduate on a high note. Check it out online using the link below, and if you want full access, feel free to contact me. 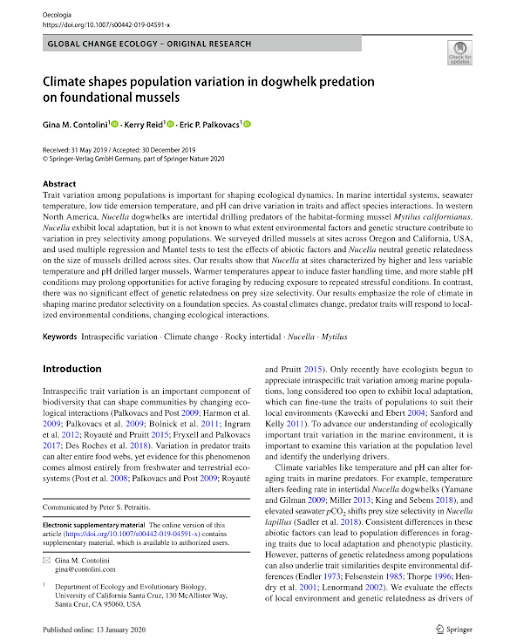 Now, I'm teaching a couple courses here at UCSC while applying for postdocs and faculty jobs in the area. It is nice to be able to transition to another phase of life!

This quarter has been full of accomplishments that have been a long time coming for me.

First, I got my first article published in a peer-reviewed journal. "Climate shapes population variation in dogwhelk predation on foundational mussels" will appear in Oecologia sometime in the next couple months. Huge thanks to coauthors Eric Palkovacs (my advisor) and Kerry Reid (former postdoc in the lab).

Secondly, I compiled an entire draft of my PhD dissertation! After many stressful weeks of finishing analyses while applying for jobs, I finally submitted my whole dissertation to my committee, and I'm very happy to report that those who have read it so far are pleased with it. I cannot understate the amount of weight that has been lifted from my shoulders. I feel at least 100 times lighter and I can do things like watch movies, play frisbee, and make snail puns again. Here is my title page as well as some new puns on old puns.

Thirdly, I got a part-time job doing environmental consulting with a company called Surf 2 Sea. I am analyzing mussel bed communities before and after a construction project at the marine lab here. For this work, I'm doing the exact same thing I've been doing in graduate school the last year, so it is a perfect transitional job. It's great to get back in the field again after being stuck writing for the last few months! 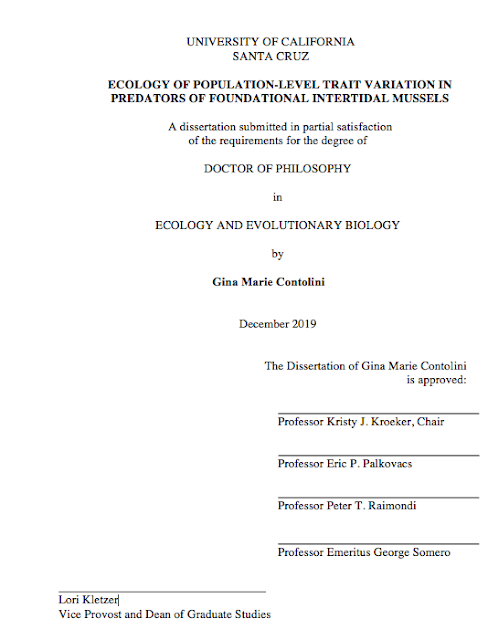 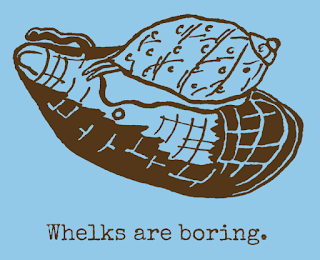 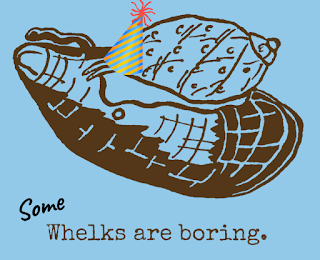 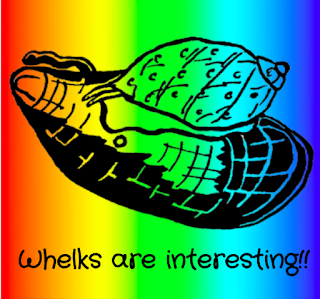 In May, I got to help out graduate student Casey Sheridan with some subtidal fieldwork. Casey is working with a team of researchers to study sea urchin population dynamics and their effects on kelp forests (the CeNSUS program).

On our trip, we collected lots of urchins and kelp to use in feeding experiments. We also collected some bat stars for a lab studying color variation in them. Here are a few pictures of our outing. 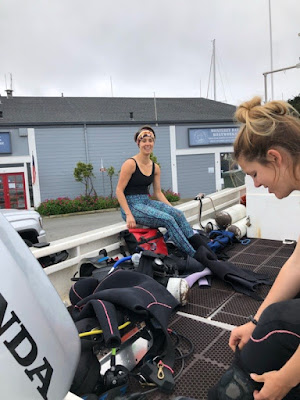 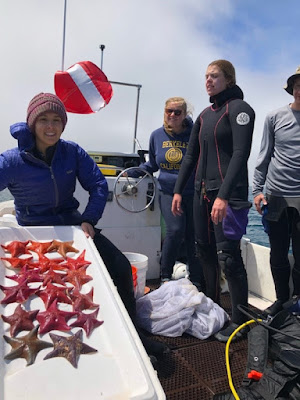 Deep inside the forest

Imagine you are a bird soaring over the top of a dense redwood forest. As you effortlessly glide on the wind, your gaze turns to the thick canopy below you—treetops of monotonous shades of green and brown. The canopy, still and silent from your perspective, is itself not very diverse; coastal redwoods dominate as the main tree species. But at a bird’s eye perspective, much is missed. Beneath the tops of these quiet giants are rich communities of plants, animals, and fungi that could not exist on their own.
Foundation species, like the trees in a forest, are species that provide essential habitat for others (Dayton 1972; Ellison et al. 2005). We call habitats formed by foundation species biogenic habitats because they are structured by living organisms. They provide shelter and food and support diverse communities. We have all been in a forest and know how much the climate changes—if you have ever hiked in Henry Cowell Redwoods State Park, for example, you know how much darker, cooler, and more humid it is deep among the trees. But there are smaller biogenic habitats we can’t hike through, and, like a bird flying high, we view only from above unless we make an effort to learn more. One such habitat is coastal mussel beds.
If you’re a resident of the central Californian coast, you’ve probably hiked down a bluff and explored the wave-swept rocky shores. Most likely, you perused the dense beds of mussels until you found a sea star, urchin, or in the very low zone, an octopus. But the mussel beds themselves are full of colorful and exciting life, supporting hundreds of species (Suchanek 1992; Lohse 1993; Lafferty & Suchanek 2016)! Here is a description of some of my favorite mussel bed species found on and within the bed.
In the mid to high intertidal zone, you can find several types of striped or checkered snails. Some of these snails eat the lichens and algae growing over the mussels, and others eat the mussels themselves. My personal favorite is called a unicorn snail, named after the single horn (also called a tooth) on the edge of its shell that it uses to open its hard-shelled prey. 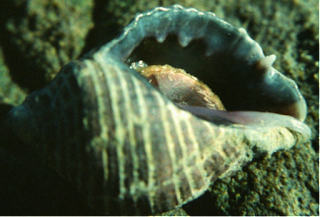 Acanthinucella spirata, the unicorn snail, also eats mussels and barnacles but uses its single tooth (also known as a horn, like a unicorn; see it in the upper right) to puncture its prey. Photo credit Dave Cowles from inverts.wallawalla.edu 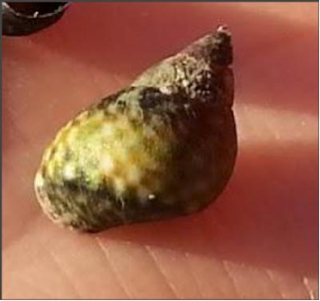 Littorina scutulata, the checkered snail, about 1 cm long. It eats lichens and microalgae and is also found above the mussel beds in the high zone. Photo credit Gina Contolini 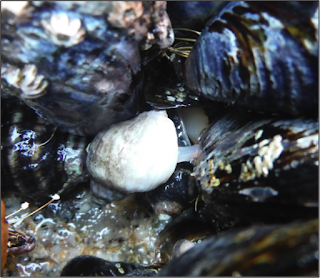 Nucella ostrina, a dogwhelk, eats mussels and barnacles by drilling a hole into their shells. This individual has its proboscis extended into a hole it made in the mussel on the right. Photo credit Gina Contolini

The mid-zone mussel bed is also home to a large, colorful worm called a pile worm (Nereis spp.). Its tough skin is iridescent and often turquoise, and it has sharp, retractable jaws it uses to attack its prey. Though there is a species of Neries native to Californian shores (Nereis grubei), a nonnative species has been introduced when fishermen discarded it as unused bait. Worms are particularly dependent on mussel beds because the beds trap sediment in which the worms live (Kanter 1977). 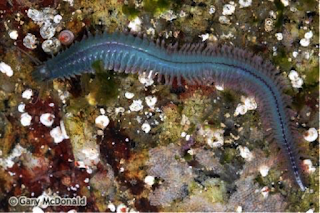 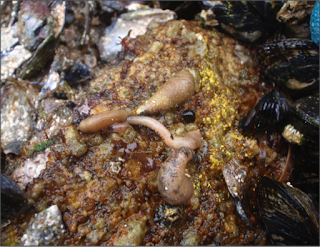 Peanut worms (e.g. Phascolosoma agassizii) that live in the sediments at the bottom of the mussel bed. Photo credit Gina Contolini

There are also many species of algae that grow on mussels. My personal favorite is Nemalion helminthoides which is a slimy, rubbery alga aptly named sea noodles. 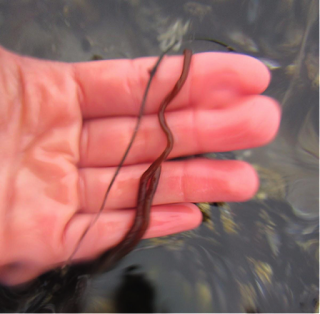 In addition to algae, some animals live on the mussels themselves. In order to do this, they need to be firmly cemented on. Many species of worms have done this by forming calcareous tubes to live in. If you look closely, some mussels have hard white dots or lines on their shells or sometimes hard rows of sand. These are the homes of different species of worms that have given up a mobile life for the safety of a hard tubular home. There is even a species of snail that has made a similar life choice and lives in a long tube rather than a spiral shell, though these snails are not often found on mussels.

Just like a forest, mussel beds create biogenic habitat that provides a home for hundreds of species. Many intertidal species require hard surfaces to live on, and mussel beds increase available colonizable surfaces five to thirty times that of bare rock (Suchanek 1992). The species above were just some of my favorites that I’ve found during my research, but there are also dozens more species of small worms, arthropods, and molluscs that live in mussel beds in California. So next time you are out on the rocky shores, don’t just breeze over the top of the canopy. Look on and within it (keeping it intact, of course) and see if you can find anything new! 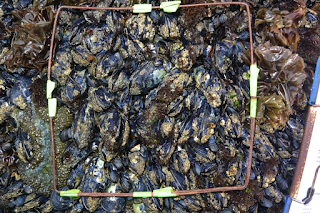 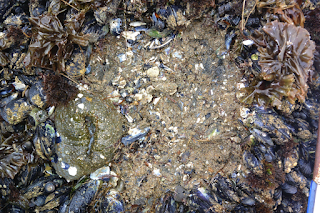 Photos of a small section of mussel bed before and after removing mussels. Sediment and shells are trapped under the mussels, and many organisms live in and among the debris. Mussels were removed under CDFW Scientific Collecting Permit #13169. Photo credit Gina Contolini

A few months ago, a fellow grad student interviewed me about my research. Now, the interview will be on the radio on a local Santa Cruz station! The station is 90.7 fm. It will air Wednesday, April 3 at 3:55 pm and Friday April 5 at 6:40 am. You can also listen online at KSQD.org.

There are always new things to learn in R that totally change how you use it. Then there are those things that are super frustrating but the solutions elude you for years. Here is my list of those things.